Today we are featuring another promising progressive metal band, SKEIN, from Finland. We have reviewed their exceptional song, FIFTH STEP – The Distance Between Gods and Men, along with its character, style, story, potential, and more.

Skein is undoubtedly one of the essential bands I discovered, making a difference with their foundations, experience, ideas, vision, and understanding of music. I can clearly say that they have the right foundations in their music, a delicious blend of atmospheric/progressive bands like Tool, Riverside, Anathema, Katatonia with some death metal-ish elements. There are many positive things to say about Skein. First of all, they have a very respectful discography. It talks for itself and introduces the band to the right people in the right way without any doubt. Secondly, I can say that these Finnish gentlemen are very experienced at what they do by looking at their compositions, lyrics, instrumentations, and song/album titles. I admire artists who show creativity not only in their music but also with their visuals and the story behind everything. In this matter, Skein is a beautiful example. A band with something to say, a message they voiced through their music.

Fifth Step – The Distance Between Gods and Men is just a piece of their new album—a very familiar and recognizable taste, an addictive journey that stays with the listener for some time. I am sure people into bands like Katatonia, Anathema, Riverside, Tool, Porcupine Tree, or Opeth will immediately feel good about Skein. These gentlemen are making music since 2008, and in my book, I don’t see any musical quality difference between their music and Katatonia’s. Some people might find Skein’s musical similarity more than it should with their influences, and I accept that. I just don’t mind it that much as long as the music sounds fresh, smart, and their decisions under control. 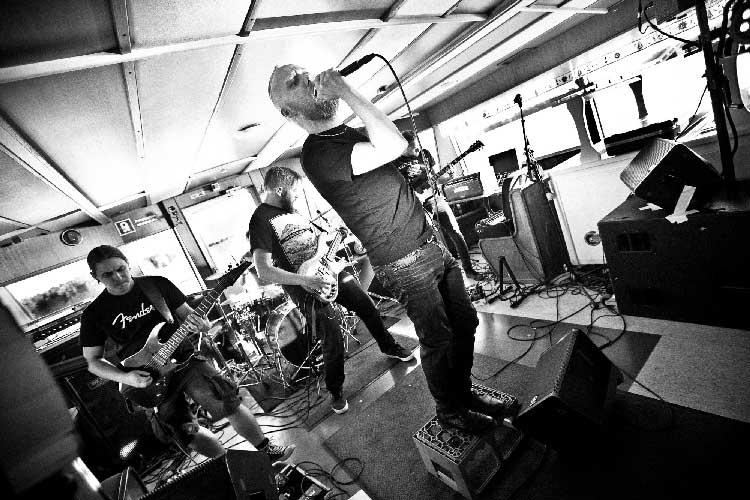 Technically, Fifth Step – The Distance Between Gods and Men has top-class standards in every way. Everything sounds clean, clear, atmospheric, dynamic, catchy, well handled, mixed, mastered, and in beautiful harmony. This is the right kind of musical character for this band. The flow is so beautiful; you don’t feel like listening to a six-minute-long song, to be honest. I’ve got absolutely nothing negative to say; this is a very successful piece of work, both with its musicality and technical side.

When I take all these into account, I’d like to say that I am well impressed by Skein. They are showing huge potential with everything that belongs to the band, and in my opinion, deserve to take part in every progressive music-oriented festival around the world. Fifth Step – The Distance Between Gods and Men is an epic song, and will make the band and their families proud forever.

FIFTH STEP – THE DISTANCE BETWEEN GODS AND MEN earned its place in our TOP METAL SONGS PLAYLIST on SPOTIFY!

In conclusion, Metalhead Community Team congratulates SKEIN for their fantastic job in FIFTH STEP – THE DISTANCE BETWEEN GODS AND MEN and wishes them the very best in their future careers. Thank you for reading.

SKEIN on the WEB