Today we are featuring an art-rock artist, SLUKA, from San Diego, USA. We have reviewed his latest single, Isn’t it Strange, along with its character, style, story, potential, and more.

Sluka is a promising artist with an incredible discography. Hands down. This is the first time I am hearing about him and his project, and I wasn’t expecting such background at first, to be honest. His latest release, Isn’t it Strange has a musical/theatrical approach in its build, a style with an unusual blend of electronic and natural instrumentation, where the artist makes the actual difference with his artistic vision.

When I watched the music video for the first time, it immediately reminded me of the legendary movie, Beetlejuice (1988). The song in general has traditional influences mostly from the 80s and 90s, to give a specific name, David Bowie and Alice Cooper. Apparently, Sluka has managed to create his own stage/music personality through the years from their influences and combined with his vision, which is quite admirable. In this way, Sluka earned our utmost respect. You don’t see artists with such character and vision in our era that often.

The technical side of Isn’t It Strange is quite average in my humble opinion. First of all, I don’t believe this is the necessary mix that the song deserves. I am afraid an artist with such discography has lost most of his potential in this example in the production process. I am not happy with the overall balance, atmosphere, and energy of the song, where I also admit that it still perfectly transmits the message to the listener.

When I take all these into account, I’d like to say that I enjoyed listening to Sluka. As I said earlier, he makes the actual difference with his originality and vision. The only obstacle in his way to success is to find teammates who can truly understand him in his career.

In conclusion, Metalhead Community Team congratulates SLUKA for his new single, ISN’T IT STRANGE, and wishes him the very best in his future career. Thank you for reading. 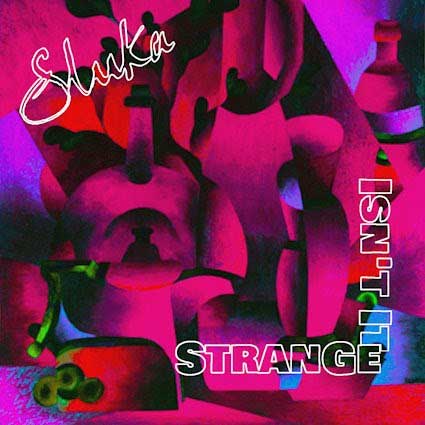 SLUKA on the WEB