Today we are featuring another promising progressive death metal band; HAVOK, from SWEDEN. We have reviewed their powerful latest EP album; Imago, along with its character, style, story, potential and more.

HAVOK is a promising progressive death metal band I have discovered about a month ago with their latest release; IMAGO, which was released in 2020. Honestly, I have heard about the other HAVOK but this was the first time I have heard about them. After listening to IMAGO a few times before writing my article, I can say that they are mostly showing potential with their ideas, attitude, and understanding of music. Please give it a listen while reading the rest of the article.

Progressive metal music is one of my favorite music genres of all time and as you might also remember from some of my previous articles that I am all about the originality and the innovative ideas in any kind of art. Havok actually is not a new band, they have been making official releases since 2009. After releasing Being and Nothingness in 2009, and Statues of Sisyphus in 2013 they have taken a long break until recently. Seeing only their discography was enough for them to earn my respect, to be honest. This band has started their musical careers with a long play album, continued with another one, and now, we have a new EP by them. This is showing us one thing above everything else; that they are a respected band.

I personally loved Imago. It is an album that will leave its delicious taste in your memory along with its mysterious vibe in your heart for some time. Honestly, I would listen to a few more songs in this specific genre of this album but still, I am totally satisfied. As there are so many aspects to mention here about this album, what blew my mind the most was the attitude of their vocalist, especially where everything becomes much more death-ish. He immediately reminded me of Jens Kidman of Meshuggah not only with his style, power, technique but with his attitude, which I believe has a huge impact on this successful outcome. You can clearly hear the big difference on the last track of the album; The Star of Tabetha Boyajian, which is my personal favorite at the same time. This main guitar riff can easily start a fuckin’ war!

The overall instrumentation varies on the album. Time to time they give the listener some badass Meshuggah tightness, which I loved the most, as well as some melodic stuff. Imago is basically a great combination of the modern progressive djent/deathcore/death metal with some melodic metal elements. In my opinion, they are quite phenomenal when it comes to death metal stuff. And I must admit that I couldn’t enjoy both sides of the coin the same. The heavier side of HAVOK has given me goosebumps so many times. However, I wouldn’t listen to their melodic side if they were only making melodic metal cause I couldn’t find the freshness, originality, and attitude where they have on the other side. I don’t want anybody to get me wrong here, they have nothing below standard here at all. Only, they are extraordinary when it comes to heaviness in music!

Technically, IMAGO is a top-class piece of work. Hands down. This is one of the very few the greatest sounding albums I have listened to in this specific genre. The dynamics and the depth in the general sound are powerful enough to pull the listener into its mysterious and dark world, which is the most crucial thing about every single album. I would like to congratulate the musicians, their producer and every single person who has taken part in the making of this badass album. Havok has convinced me that they have got the potential to surprise the whole world with their understanding of music. I mean it. Imago is a wonderful album, another big step forward in their careers without a doubt!

When I take all these into account, I’d like to say that I am impressed by Havok. As a die-hard metalhead and progressive metal fan, I have had a great time while listening to this album. As I have mentioned above, my favorite song is; THE STAR OF TABETHA BOYAJIAN, especially the riff of the decade at 06:20.

THE STAR OF TABETHA BOYAJIAN has earned its place in our TOP METAL SONGS playlist on Spotify as well! Please go ahead and check out the links below if you’d like to find out more about the artist/band, follow them on social media and subscribe to their channels to show your support and also not to miss any upcoming releases. 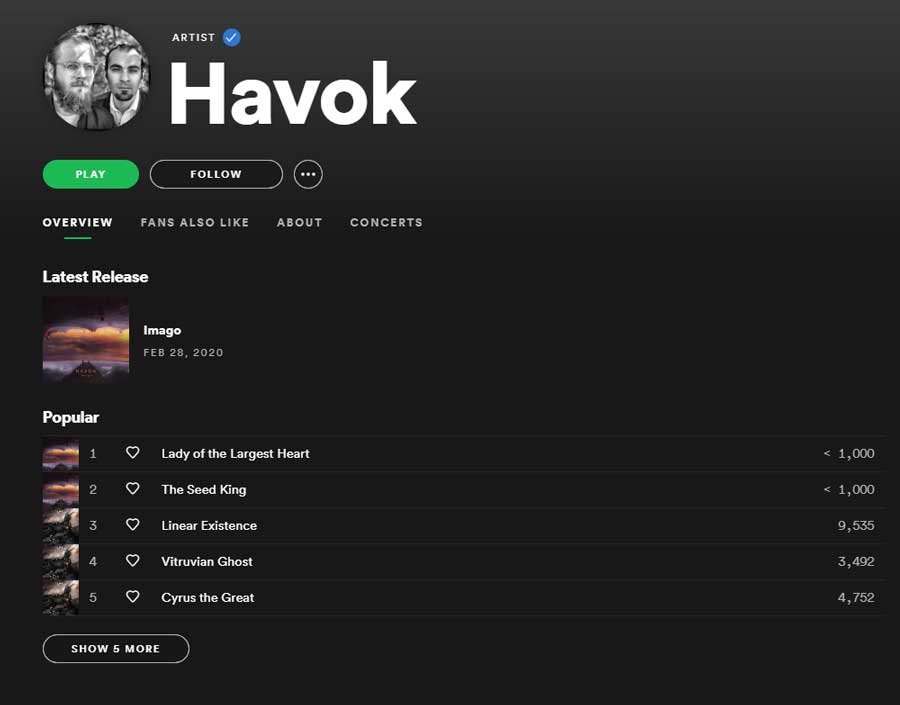 In conclusion, Metalhead Community Team congratulates HAVOK for their exceptional step forward in their careers with; IMAGO and wishes them the very best in their future careers. Thank you for reading.

HAVOK on the WEB