Today we are featuring another promising deathcore metal band; Evenfall Elapsed, from Taiwan. We have reviewed their successful song; The Sinking Sun, along with its character, style, story, potential and more.

Evenfall Elapsed is another promising progressive deathcore/metalcore band I have discovered through Metalhead Community Submissions about a month ago with this song; The Sinking Sun, off from their debut EP album; State of Mind, which was released in 2019. Evenfall Elapsed surely is an assuring metal band with super tight instrumentation, monstrous sound, and incredible energy. However, I believe that they make a difference here not only with these characteristics but with their delicious blend of Eastern and Western influences as well. Give it a listen while you read the rest of the article.

The U.S. and The U.K. based metal bands have pioneered metal music from the beginning up to this point. Recently, I can see that this is about to change. Our ears are filled up with Western-influenced music, so people have started to look elsewhere to find the freshness we are all dying for in any kind of music. In my opinion, the future of our most favorite music will belong to those who can bring new ideas to the table from their regions, just like System of a Down has done back in time, and just like in this example.

Evenfall Elapsed is a new band with irresistible energy in their music. This surely is a big deal which will play for their advantage if only they can generate the same energy while playing live. The Sinking Sun is a very good example of what I mentioned above about the blend of different cultures into metal music. As you can also hear, the general structure of the song is quite progressive and the general vibe is western-oriented. It’s impossible to say that you are listening to a band from Taiwan up to some point. Just like I mentioned in my articles from time to time, we are looking for potential rather than great songs from new bands. And Evenfall Elapsed in this way has a great chance to become one of those who will make a big difference in the future.

Technically, The Sinking Sun has above average standards in every way. I personally loved the dynamics the most. But I can’t say the same thing for everything. There are some moments where you feel like the general sound is too distorted and not clear enough. I am aware that this might be the band’s request or decision, and I respect that. Again, they are an up and coming band so this outcome is quite acceptable.

When I take all these into account, I’d like to say that I am well impressed by the potential of Evenfall Elapsed. They have the spirit, skills, the right approach and the right attitude of the job. These characteristics will surely get them somewhere satisfying. However, above all these things, they have the potential to bring some influences from their roots to this western music and become one of the very few well-known bands in their genre. Briefly, The Sinking Sun is a very successful track off from their debut album. It might not be the one that will take these Taiwanian gentlemen to the next level in their careers, but it surely is a big step forward! 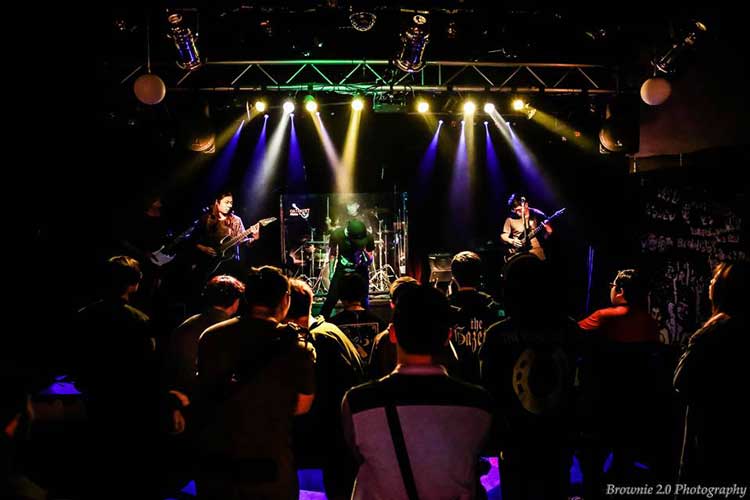 In conclusion, Metalhead Community Team congratulates Evenfall Elapsed for their successful piece of work; The Sinking Sun, and wishes them the very best in their future. Thanks for reading.

EVENFALL ELAPSED on the WEB